Mana Joana, for the first time in Mozambique (testemonial)

"I was not yet able to digest the last 24 hours, so do not expect to much from my first "report". The day started early and the trip went well, and not as long as I expected it. I was very attentive all the way.  Two things impressed me - 1) the number of small children vs. the rest of the populationand 2) the amount of people spread around (living or passing by) each 5km of the National 1 Road. I clearly underestimated both. 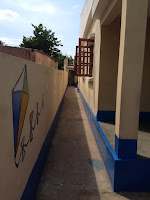 Mano Hilário received us very well when we arrived to Xai-Xai and we went to the Pre-School Escolinha Flor da Infância. We arrived by 11. "Vovo" (Grandma) Etelvina received us and showed us the 3 classrooms. We spent more time with the 3 year olds. At first, they were very shy, but as we sang with them we got some smiles back.  The highlight of the visit for me was to see how well the children looked (including smiles) and the way they screamed out of their lungs "we are doing very well thanks to God". :-) I found them very well behaved for their age and obedient. Two children from the 5 year old classroom counted to 10 for us.

We sat down with "Vovo" and she explained to us how the school was created and how it used to be. I asked about the breakfast - milk 3 times per week and soy meal 2 times per week - and lunch - which included multiple things such as rice, vegetables, beans, chicken (once a week). Today, was soy meal for breakfast and rice with vegetables for lunch. We talked about how the price of certain produce had increased, including rise and peanut (use as basis in their food).  I asked about the children's health and what they did when they were ill. After our talk, "Vovo" showed me the kitchen, the bathrooms and the oven.

They offered us lunch but we chose to watch the children for their lunch instead and distribute the candy we brought with us. This was another high point of our visit, as I finally experienced what I so often before have seen in the pictures. I was not worried in taking more pictures. The candy were well received!

I was very impressed with Vovo and her memory and energy in light of her advanced age.  We left the school at the same time as some of the children who were heading home.  I was impressed by the ones that were going on their own, but happy to see some older brothers (also quite young) waiting for them outside the school. 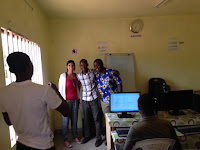 From the school we went to the IT Center of Mano Arnaldo. He was very kind and received us well.  He explained to us how the IT Center worked and what the workshops were.  He said he had more competition this year and introduced his new assistant to us. The IT Center seems nicely put together and well functioning.
Tomorrow, we head to Chokwe!"

Mana Joana is Trustee in A Little Gesture UK.

Posted by A Little Gesture at 7:31 PM