"This is Not Human" 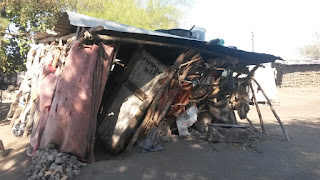 "Here, the day begins early. Since the weather is really hot, people became used to get up before dawn. But many students wake up even earlier, because they have to walk long distances to go to school. Their main motivation is to get a free meal, which for many is the only meal they have throughout the all day.
Our workday started with a discussion about the living conditions of the Chokwe community. Sister Alice, head of the school, told us about the situation of a family living in very precarious conditions, saying they were one of the poorest families in the region. We decided to visit the place where they live.
Today we saw extreme poverty. It was a "home", about 6 square meters, built with tree branches, stones, rags and mud. It had no door and was completely exposed to the surrounding dangers. Five children live there, two of them were really young. These children are orphans and their grandfather is the person who takes care of them. He is quite old and sick and the space is so short that he has to live in a tent right next to the house.
We told him we would make every effort to help them. First, we hope to transfer the kids to a school closer to their home. They take 2 hours to go to their current school but they have one much nearer to their home.
To experience the living conditions of these children was shocking. We find it unacceptable that someone is living under these conditions."
Posted by A Little Gesture at 8:04 PM No comments: 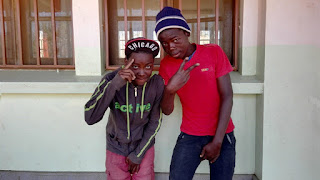 Today was the monthly distribution of basic food baskets to the families of this community. When we arrived to the school, we found kids and their respective families, eager to get the baskets.

Among dozens of children were two boys listening to a rap song and singing the lyrics with an amazing passion. While the boys were singing, a staff member from the school named Orcídio, the local coordinator of ou NGO there, told us they were the ones who created those songs. We froze! The songs looked like they were made by real rappers! “These kids are talented, we need to talk with them” we said.

We asked if they had streamed them online or somewhere where we could follow them. But they told us they were struggling with the video production and sharing it online (because the internet here is not that accessible). They´re a rap duo and they definitely have the hunger to succeed.  They gather every money they make to create these songs with a local producer. 150 meticais (about 2 euros) to go to a studio to record each song. All the lyrics were written by them. It is amazing to see kids fighting for what they dream. We were hectic, we need to help them!

We offered ourselves to convert the songs for videos and upload them on YouTube. They looked at each other as if they had signed a million dollar contract.

So now you can find them on Youtube, search: "A% layz ft kid crayz & chin fayt on the gost - Block soldier". Next week we will show them the videos, let´s hope they like it. Check their songs on Youtube!
Posted by A Little Gesture at 5:49 PM No comments:

"Our first moments in Mozambique", by Bernardo and Filipe 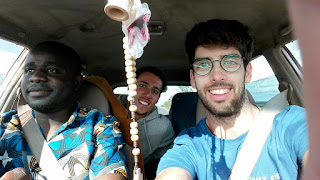 After an 11 hour flight and waking up and falling asleep constantly, we finally arrived in Maputo (Mozambique´s capital). The first chat with a native happened in the very next moment, in the luggage pick up area. A man approached us with a smile and a proposal.
According to him, the security guards (that were verifying the luggage at the airport exit door) would take some of our belongings and force us to stay there for hours. They would argue that we don´t have permission to bring some of our belongings. How could we avoid this unpleasant experience? By paying this guy a little bit of money and he would “sort everything out”.
Well, we decided to follow the advice … of a friend that warned us before about this kind of situation and we said: “No, thank you”. The outcome? We went through the guards and everything was fine. We were officially in Mozambique! Straight away, an ex-volunteer from our NGO (Um Pequeno Gesto) and her father came to pick us at the airport. They were lovely and extremely welcoming. She was in town to revisit the place where she volunteered 5 years ago.
On the way, we saw a little bit of Maputo. The first feeling that we got was: “This is clearly a developing country”. Even though it is a city, with buildings, banks, etc, everything looked a little old and decadent. But the sightseeing of the Indian Ocean was beautiful. On our way, there´s a famous road that takes you to a place called “Macia”. Imagine it like an African version of the “Route 66”. Locally, probably it has the same importance, since it connects vital cities. We saw a lot of people sitting down on the floor selling fruits. While we were crossing this street, out of nowhere loads of people started running in our direction. It looked like something big was happening. We had no clue of what was going on but we found it surprisingly funny. Our car was surrounded by natives. It turns out, they were trying to sell us cashews (cajus). And they were the best ones we ever had! Ahhh… Mozambique !!!
20 Minutes later, we arrived in Xai-Xai. There was no sidewalk, the pavements were made of dirt, mud and brown water puddles. The majority of the buildings had only one floor and looked old. Some other buildings were painted all in red. And then, the Coca-Cola or Vodafone logo. These buildings were bars, cafes and local stores. Apparently, these companies offer these paintings and they are extremely popular here ahah.


Right next to the road, kids with yellow vests are selling mobile cards to top-up mobile phones, some women are walking with bowls of fruits at the top of their heads and others are sitting down in the dirt, selling stuff. Some women with typical African skirts, some kids without shoes, others with their feet inside the water puddles. Everything looked similar to what we usually see in documentaries and movies. At the same time felt different, now it was real!
Posted by A Little Gesture at 6:15 PM No comments: 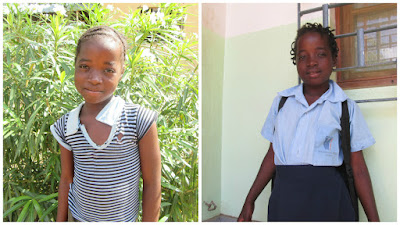 Azélia Cuna is one of the girls attending the HIV Day Care Centre. She’s 10 years old and she’s a hard working student and very dedicated to the Centre. The picture on the left was taken during the ALG’s Board visit in April this year. The one on the right was taken only one month later when our Local Partner and Technician Orcídio informed us that Azélia was a successful case at the Day Care Centre. Usually, in the beginning of the school year in Mozambique (February) children arrive at school with weak nutritional values, after a break in classes of over 2 months (less for children attending the Day Care Centre). Thus, as soon as they start attending classes e benefiting from the daily meals at school the children quickly improve, gaining back the lost weight and becoming healthier. Thus, within a month the differences are remarkable! During the first quarter Azélia had no negative results and her average is 12; an improvement comparatively to her results last year. So we are very proud of this girl who, thanks to the HIV Day Care Centre, is benefiting from a carefully balanced nutrition and medical monitoring.


You can also help: with £73 per month you are securing a healthy childhood for children like Azélia instead of letting them follow the tragic fate of thousands of children infected with HIV in Mozambique!
Posted by A Little Gesture at 6:44 PM No comments: