So much happening in Chokwe!

Sister Neusa is being evacuated to Maputo again and the other Vicentine Sisters from Chokwe are returning to Carmelo Hospital one more time. Sister Lidia and the Sisters in Manjangue have refused to leave again. At Carmelo Hospital thousands of refugees are being helped with the support of Medicos Sem Fronteiras (the local arm of Medecins Sans Frontieres). Yesterday Hilario went to the Hokwe project but the children where studying already so he intends to return. He informed us that people are leaving Chokwe again as authorities in South Africa intend to open the dams again.

In Mount Chirrundzo, around the Orphan Centre CRPE, a makeshift hospital has been organised with the support of a Medecin Sans Frontieres. Tomorrow new latrines will be opened to the displaced population around the Centre, an essential and urgent necessity for disease control.

With the support of international engineering company OpWay and south african neighbours, a new road to connect CRPE and Manjague has also been inaugurated. It is still a dirt track road, but it allows the journey to be done in under 10 minutes. 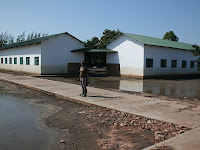 Finally, close to the Chinhacanine dam, and on all the available fertile lands, the people are planting CORN seeds!
According to Brother Licinio, our indefatigable partner at the Orphan centre, "it is a beautiful sight, the people here really want to get up and work, it is not in vain that we named the CRPE Centre Rebirth for Hope! The have not stood still with their arms down, they are working and fighting to have their daily bread!"