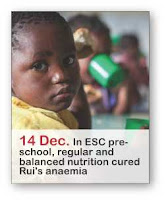 In Mozambique only 4% of children have access to pre-school education, mainly in urban areas. 50% of the Mozambican population is composed by children who live in rural areas. ALG finances two pre-schools, in Chongoene and Xai-Xai, helping around 120 children between 3 and 6 years of age.

Rui de Jesus Muianga is 4; he lives with an elderly and ill grandmother. His mother abandoned him when he was just a baby. Rui is the living example of the urgent need of a service such as sponsored pre-schools.

Before attending pre-school he was diagnosed with serious anaemia and had several relapses. Today he has breakfast – tea/milk and bread with jam – and has lunch at pre-school.

This year in March, the Month of Milk, our campaign raised over £650! With this amount it was possible to guarantee more than one year of milk supplies for pre-schools. These are examples of Little Gestures that allow children like Rui to have proper nourishment for their age!

https://mydonate.bt.com/events/algxmascalendar2012
Posted by A Little Gesture at 10:08 AM