Day 10: With three new ALG water holes in Chongoene, women and children no longer walk several km to get water 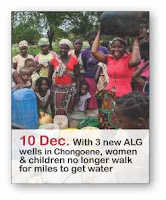 1.250 people will soon have drinking water and the women will no longer have to walk several miles to bring water to their houses.

Water scarcity is very serious in the Chongoene region. Our Local Partner Father Rosendo, ALG and Cáritas worked together to identify the villages that needed a well more urgently. Along with the village survey, training was also provided to prepare the community on the well’s maintenance and functioning.

Two communities were identified, Bungane and Conjoene. Bungane had 3 wells and they were insufficient, especially during the Summer. Many people walked more than 2 hours to carry water from a small river, or if they took water from one of the wells they had to wait in line from 3 to 5 hours. ALG’s financing of a 4th well in late 2012 means that 3’568 people will now be covered with an adequate water source. Conjoene’s situation was equally problematic.

ALG wells already began to be drilled in Conjoene and Bungane. The happiness amongst the moms and families is amazing!