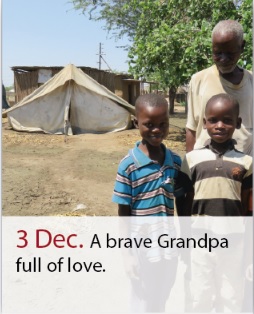 The year of 2016 was particularly hard for the communities under ALG´s care in Chokwé, including the children sponsored by our sister-charity UPG Portugal. In this rural region, where it does not rain for over a year, the extended draught has prevented domestic crops to grow. Thus, the underprivileged families cannot rely on the land to survive as they have been doing for decades.

ALG could not remain indifferent to each day that went by and to the several requests made – we had to help.

During one of our team´s visit on the ground, in August-September, Joana and Anabela made their usual visits to the families with our Local Partner. They met Grandpa Simião wholes been called to our attention by volunteers Bernardo and Filipe. Simiao lives in a tent received in 2013, after the regional floods, with the whole family. This tent shelters one of his daughters, with two children (Rafael 8 years old and Márcia 6 years old) and a grandson (Andrisse with 8 years old), also is under his care after being abandoned by his mother. We immediately authorised for a basic food basket to be delivered to these children on the following food distribution day, making up the 200 Sponsored children we currently have in SVP.
UPG Portugal began its Sponsoring Programme, in 2004, with 50 children. After more than a decade UPG and ALG support more than 850 sponsored children in the areas of Xai- Xai, Chongoene and Chokwé. Each child has a sponsor and has access to school and to nourishment, through school meals and through basic baskets for the whole family. Besides the material goods, Sponsoring brings care and attention to extremely underprivileged children.
A Little Gesture from £130 per year can be a Great Help for the life of a Mozambican child. Join this community!

ALG has been offering this festive calendar to all ALG Friends since 2011. This year, you can also print a high definition version for only 1£! Donate here

Posted by A Little Gesture at 5:14 PM