ALG filled its second set of accounts with the Charity Commission - and what a great year 2012 was! 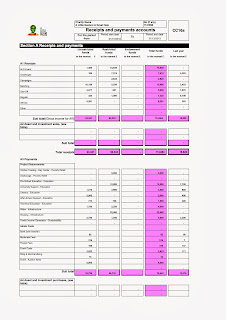 The Charity received funds of £114´684 in 2012, an extremely encouraging increase from the £16´823 in donations received in 2011. At close of year, the Charity’s Cash Funds stood at £42´688, net of costs and a disbursement schedule of £76´445 with  Admin Costs at £10´445, higher than ALG best practice.
The Trustees will continue to monitor the running costs to sustain the goal of 95p per pound raised and will energetically seek support from a more extended volunteer and donor base.

During the year of 2012 excellent progress was made towards increasing the awareness of A Little Gesture as well as expanding its donor base in the UK. In Mozambique the Charity’s intervention was much enlarged from the launch year with £66’000 of funds applied directly in local projects from £12’000 in 2011. These disbursements enabled the organisation to support 7 Local Partners and help an estimated 2’533 direct beneficiaries in Xai-Xai, Chongoene and Chokwe as well as a multiple of this number in indirect beneficiaries in these communities. The achievements were focused in areas covering essentially access to water, family housing, orphan support and academic education.
The Charity disbursed 58% of funds received to local operations in Mozambique and directed 91p per pound donated to charitable projects, a higher cost ratio than targeted by the Trustees in what was a year of investment and growth for the organization.

A highly successful Launch Event gathered almost 300 supporters in the Portuguese Embassy and raised £74’036 vs an initial budget of £20’000-£25’000. Under very strict cost control the Event allowed the Trustees to proceed with the construction of two water wells in the isolated areas of Conjoene and Bungane (after an initial goal of one) as well as to support the rolling out of several educational and family housing projects, well above initial expectations.

For the whole year, coupled with the success of the JP Morgan Corporate Challenge and other donations, funds raised reached £114’684. This encouraging result allowed the Charity to extend its support to the CRPE Orphan Centre with an ambitious daily feeding programme, as well as to inaugurate its support of literacy courses for adults in Conjoene and Banhine, a remote and impoverished rural area where young mothers suffer from high illiteracy. The two significant disbursements in 2012 still allowed for cash funds of £42´688 to be registered at close of year.

On Uses of Funds in Mozambique, in terms of achieving the objects set out by the disbursement programme, all the projects above were financed with no noteworthy deviation from the approved budget. There were several delays to the inauguration of the water wells, including a shortage of pumps, as could be expected in a construction project, but these were finally overcome with the effective launch of both wells at year end. In the housing and educational areas, implementation and completion of the approved projects was duly made.

On a qualitative basis, reports from our Local Partners continued to show enthusiasm for our programme, recognition and often gratitude from the beneficiaries and, more importantly, a marked improvement in the quality of life of the children and their families under the Charity’s intervention area. More progress could be made in terms of reporting from some of the more remote areas but technology constrains (poor internet quality, basic IT) coupled with local staff limitations (time and costs) continued to pose challenges to reporting to headquarters on a timely and adequate manner.

Contact us if you wish to know more on what YOUR Little Gesture has done!

Posted by A Little Gesture at 3:58 PM