In the flooded SVP school… testimonial from Hilario 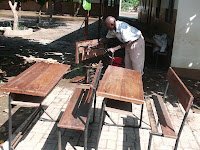 "From this side things are starting to go back to normal, while still affected by the recent Chokwe floods. The hospitals, shops and markets have started to work again. Care must be taken with all the food supplies and all goods sold as part of these were previously contaminated by the overflowing waters.On the other side there rate many osquitos at the moment and basic health sanitation is not at the highest levels. In the near term we still feel very threatened by an explosion of malaria and diaharrea-led diseases such as cholera.It is worth noting malaria is the number two cause of death in Mozambique after HIV/AIDS. In S. Vicente of Paulo school ("SVP"), in neighbourhood 5 of Chokwe, after the devastating effect of the floods it is now time to put our hands and hearts to work, raise our heads and get the children to smile again.
In our SVP school, the children have slowly returned, meaning they have finally left the refugee camps in Chiaquelane and Macia. This is despite official government announcements that all the displaced population should be sheltered in safe locations (such as Chiaquelane and Macia). Following this return to the village, we started a small census of the children in SVP directly sponsored by our portuguese sister-charity UPG. We had a total of 79 children in the final week of February, though it is important to note that every day the situation seems to stabilise and more children are returning to school. 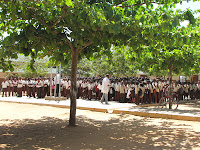 For now I am organising the class lists for the after-class study centre in SVP. I intend to send you final enrolment lists by the end of next week.

During this period we managed to distribute our basic monthly baskets to the families under our support programme. These contained rice, corn flour, oil, salt, sugar, beans and peanuts. These baskets made a dramatic difference to our impoverished families in the area.

We were also blessed with school material kits containing 10 notebooks, a ruler, a rubber, two roll pens, two pencils, a pencil sharpener and a school bag from Unicef.

This is a small summary of what happened here in February.
A huge thank you"

While March is the Month of the Milk at ALG, our Emergency Fund for the ongoing floods crisis is still open