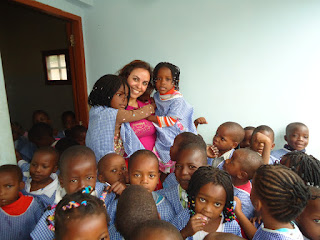 "Last year, the children in the preschools Flor da and Santa Carina drank their little cup of milk and half a bread so willingly an with such appetite…You makes you wonder how much you can offer with such little

I should't even tell you this.. but oh well!
Once over the week-end, one of the children that were having classes under the almond tree, in S. Catarina, came to knock on the door of the volunteers. He wanted to play! I decided to give him a glass of milk with a bit of chocolate powder and some cookies. Well… I can only tell you I had never seen such a thrilled child with one glass of chocolate milk!! He drank and ate very slowly so the moment would last for longer. "Do you like it?" I asked? And he nodded with his head saying yes, yes…and enjoying that tiny comfort so much.

From Virginia F., a portuguese volunteer in Chongoene with UPG Portugal in October 2012
Donate Now! https://mydonate.bt.com/events/algmilk2013/95587

Posted by A Little Gesture at 8:01 PM